An animal lover has revealed how tripping over a bramble during a dog walk led to an earth-shattering diagnosis of stage four cancer.

Rachel Watkins, 40, was walking her dogs near her home in Okehampton, Devon, when she fell and shattered her right hip, leaving her in complete agony.

She was able to drag herself back to her car, where she phoned for help and was raced to Royal Devon and Exeter Hospital.

A scan revealed that a tumour had been silently growing in her hip joint, weakening it over time.

Investigations concluded that she actually had stage four metastatic breast cancer, which had spread to her hip and ribs. 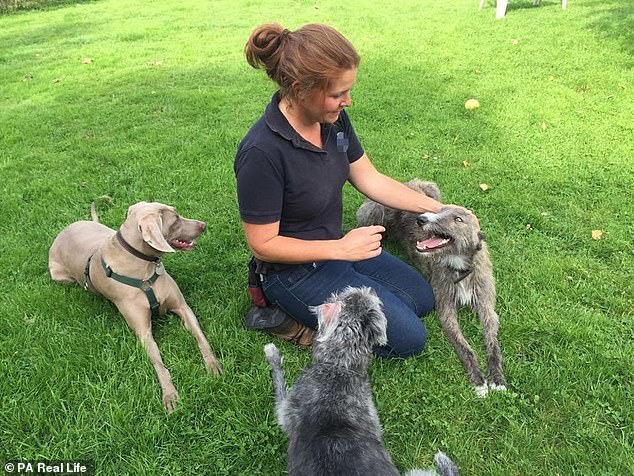 Animal lover Rachel Watkins, 40, had been experiencing pain in her hip and tiredness for a year before her devastating fall when on a dog walk near her home in Okehampton, Devon 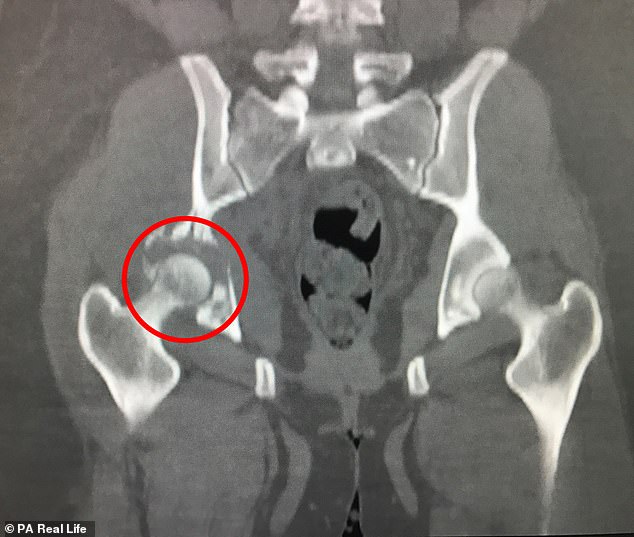 Miss Watkins’ scan at the hospital straight after her fall showed where a tumour had eaten away at her hip bones (circled). Later investigations found that she had stage four breast cancer which had spread 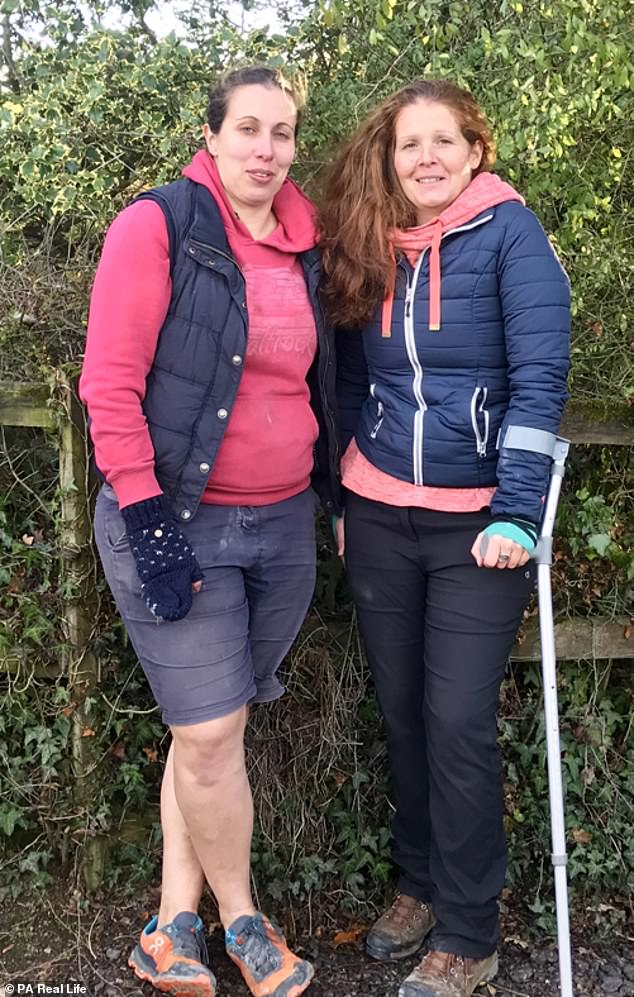 Friend of Miss Watkins, who is still recovering and uses crutches to walk, Abi Hall (left) is running South Devon Trail Marathon to raise money to grant a lifelong wish of Miss Watkins’ – to take photos of whales in the wild before her condition becomes too severe

Miss Watkins had a full hip replacement and bone graft and is still having hormone treatment to keep the cancer at bay.

But she was devastated at the news she wouldn’t be able to have children.

Miss Watkins’, who was previously a practitioner for animals – using her hands like a chiropractor to relieve problems with joints, muscles and bones, had been experiencing pain in her hip on and off for a year, and there were a few signs of what was to come.

She recalled feeling very tired and changing her deodorant, as she had an itchy armpit, as well as experiencing frequent aching in her right hip, particularly at night.

Miss Watkins assumed this was down to bursitis – where the joints become tender and swollen – especially as it eased off after a month.

‘I was so tired before all of this happened, but put it down to being self-employed and slogging away’, said Miss Watkins.

‘In around 2016, I began running with my dogs, I remember being out one day and feeling a sudden sharp pain, again in the right hip.

‘But, because it got better with rest, I thought it was a simple sports injury.’

Things changed forever for Miss Watkins, as she walked her dogs on March 9, 2017.

Miss Watkins added: ‘I remember it so clearly. It was a stunning spring day, so I couldn’t resist taking the dogs out.

‘Next thing I knew, I tripped over some brambles and landed on my right leg. The pain was like nothing I’d ever experienced.

‘It was making me want to pass out. I knew something catastrophic had happened.’

She added: ‘I knew I was in trouble, but I couldn’t bear to ring for help without knowing my dogs would be safe.’

‘Friends say that was typical of me, but I wasn’t thinking properly and didn’t want them to be left alone for god knows how long.

‘Neither me nor the paramedics have any idea how I managed to drag myself back to the car and put the dogs inside, but I did.’

After ensuring her pets were safe, Miss Watkins phoned for help and was taken straight to hospital, where an X Ray and CT scan were performed.

‘Doctors told me that my hip joint was so fragile it was like an egg shell, and the fall had shattered it’, Miss Watkins said.

Tragically, not only had she broken her pelvis and shattered her hip, but a number of tumours had been discovered.

Further investigations concluded that she actually had stage four metastatic breast cancer, which had spread to her hip and ribs. 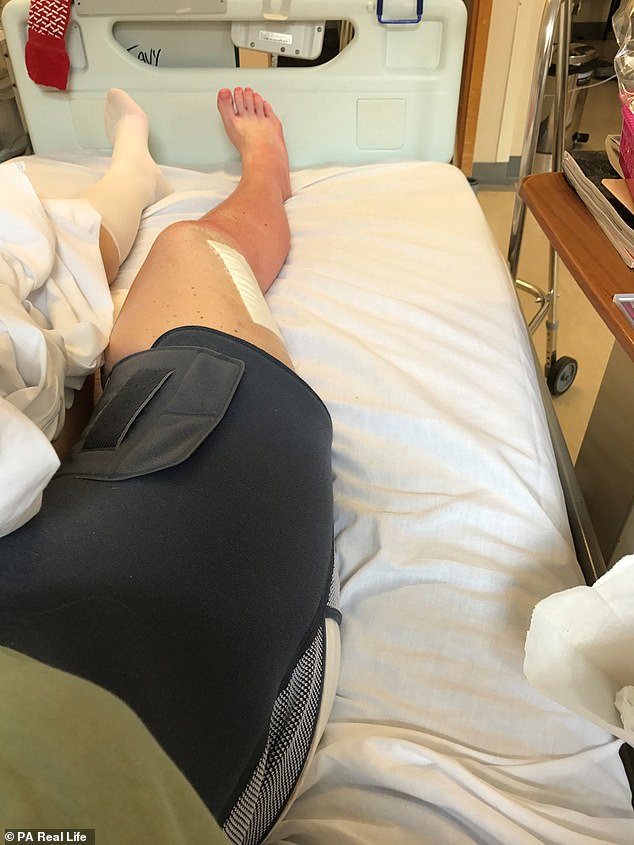 ‘Doctors told me that my hip joint was so fragile it was like an egg shell, and the fall had shattered it’, Miss Watkins recalls. Above, her hip in a brace in hospital 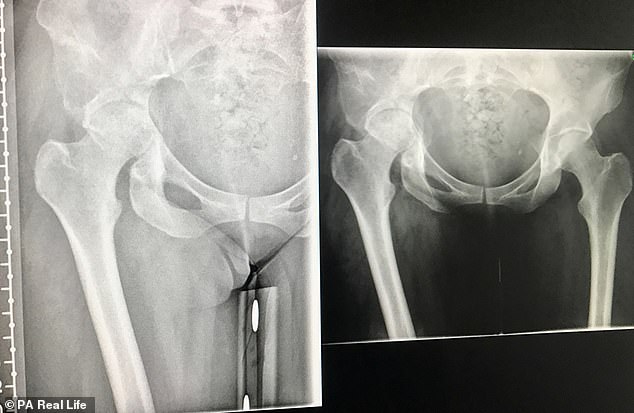 Miss Watkins’ X Ray when she was first admitted to hospital, showing where her femoral head had ‘pushed through’ the fragile bone 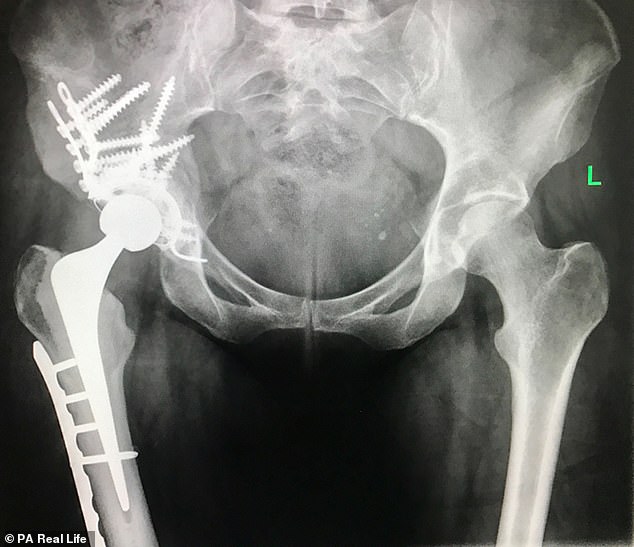 Miss Watkins had a full hip replacement and bone graft, then having a metal plate and mesh cage fitted to strengthen her limb at Royal Devon and Exeter Hospital 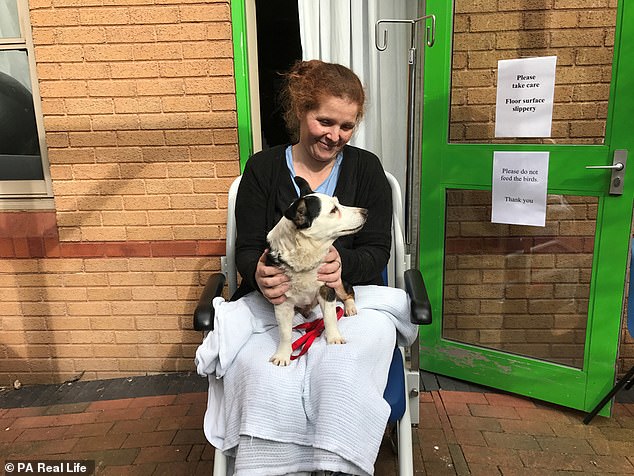 After her diagnosis, Miss Watkins began a course of radiotherapy, as well as hormone therapy to control her cancer, rather than cure it. Above, Miss Watkins on her first day outside in six weeks whilst in hospital

‘More tests revealed that the cancer had actually started in my left breast,’ she said.

‘When they told me, I just shut down with shock. I didn’t cry, I was almost calm – but not a nice calm.

‘The primary tumour was in my left breast, which was malignant and hormone receptive, as well as a few other lumps which, though turned out to be benign, I had no idea were there.

‘That was really shocking, as we all imagine lumps to be pretty obvious.’

She added: ‘The doctors were amazing. Once they’d broken the news, they asked if there was anything I needed. I joked, “A stiff drink” – but they actually bought me in a bottle of whisky the next day.’

After her diagnosis, Miss Watkins began a course of radiotherapy, as well as hormone therapy, in the form of Letrozole tablets and Zoladex implants.

Initially, it was feared surgery was not a viable option, because of the severity of her case, meaning she risked losing the ability to walk.

But, thankfully, orthopaedic surgeons at Royal Devon and Exeter Hospital were able to operate in the end.

In April 2017, she had a full hip replacement and bone graft, then having a metal plate and mesh cage fitted to strengthen her limb.

‘I’m still not fully recovered from that. I progressed from walking with a frame, to two crutches, to one, but still need regular physiotherapy and bone strengthening treatment,’ she said.

‘I’m continuing to have hormone treatment, too, but because I’m classed as stage four, it’s more to keep the cancer at bay than to cure it.

‘One of the hardest parts of everything is that it has scuppered any chance of me having children. Being a mum was always a dream of mine, but now, with the prognosis being so uncertain, it’s just not an option.’ 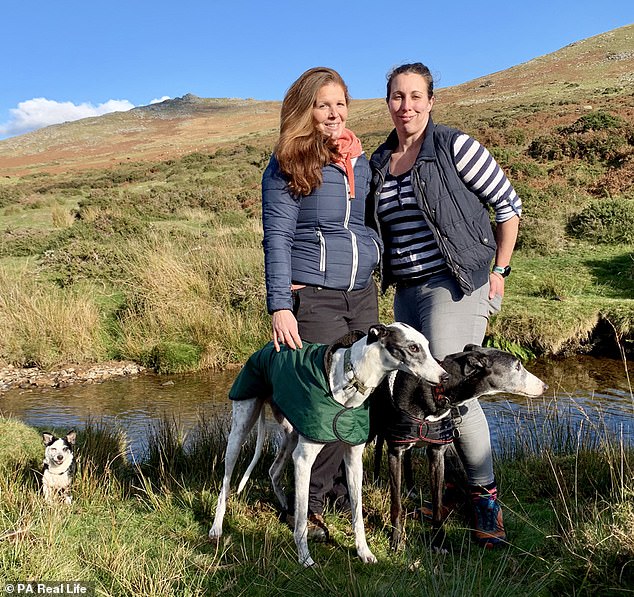 Mrs Hall  has set up a GoFundMe page for Miss Watkins ahead of the South Devon Trail Marathon in February.

Fearing her time could be limited, Miss Watkins, who is now unable to work, became intent on making a lifelong wish come true, to take pictures of whales in the wild.

Her friend, Abi Hall, made the remarkable offer to run the gruelling South Devon Trail Marathon to raise money for Miss Watkins so she can visit either Canada, Sri Lanka, or Mexico, before her condition became too severe.

Ahead of the race in February 2019, Mrs Hall has set up a GoFundMe page for donations, and has even recruited a number of Miss Watkins’ loved ones to run 5km, 10km and half marathon races.

‘Abi is such an incredible woman. Although she’s one of my newer friends, she’s one of the most supportive people I know,’ said Miss Watkins. ‘I’m so humbled by what she’s doing.

‘Right now, I’m working to the six-monthly scans I’m having, but I do live in fear that it could all change at any time, so it would mean the world to be able to get out and live my dream while I still can.

‘If my life is short, why shouldn’t I get these memories in now?’

Miss Watkins also plans to donate any excess funds to the charity Children With Cancer UK.

She also hopes that by sharing her story she will encourage other people to get checked out, if their health changes.

‘I think we live in a culture where we’re all going at a million miles an hour, so tiredness is expected, when actually, it can be the biggest indicator that something is wrong.’

WHAT IS BREAST CANCER, HOW MANY PEOPLE DOES IT STRIKE AND WHAT ARE THE SYMPTOMS?

What is breast cancer?

Breast cancer develops from a cancerous cell which develops in the lining of a duct or lobule in one of the breasts.

When the breast cancer has spread into surrounding breast tissue it is called an ‘invasive’ breast cancer. Some people are diagnosed with ‘carcinoma in situ’, where no cancer cells have grown beyond the duct or lobule.

Most cases develop in women over the age of 50 but younger women are sometimes affected. Breast cancer can develop in men though this is rare.

The cancerous cells are graded from stage one, which means a slow growth, up to stage four, which is the most aggressive.

A cancerous tumour starts from one abnormal cell. The exact reason why a cell becomes cancerous is unclear. It is thought that something damages or alters certain genes in the cell. This makes the cell abnormal and multiply ‘out of control’.

Although breast cancer can develop for no apparent reason, there are some risk factors that can increase the chance of developing breast cancer, such as genetics.

What are the symptoms of breast cancer?

The usual first symptom is a painless lump in the breast, although most breast lumps are not cancerous and are fluid filled cysts, which are benign.

The first place that breast cancer usually spreads to is the lymph nodes in the armpit. If this occurs you will develop a swelling or lump in an armpit.

How is breast cancer diagnosed?

If you are confirmed to have breast cancer, further tests may be needed to assess if it has spread. For example, blood tests, an ultrasound scan of the liver or a chest x-ray.

How is breast cancer treated?

Treatment options which may be considered include surgery, chemotherapy, radiotherapy and hormone treatment. Often a combination of two or more of these treatments are used.

How successful is treatment?

The outlook is best in those who are diagnosed when the cancer is still small, and has not spread. Surgical removal of a tumour in an early stage may then give a good chance of cure.

The routine mammography offered to women between the ages of 50 and 70 mean more breast cancers are being diagnosed and treated at an early stage.