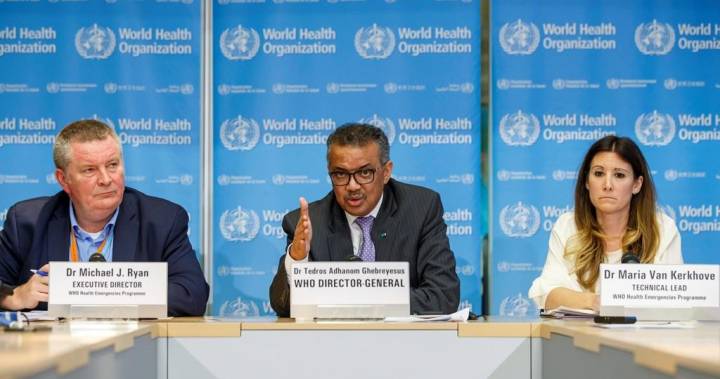 The World Health Organization (WHO) regrets the U.S. decision to withdraw funding from the organization, its director-general said Wednesday.

“The United States of America has been a long-standing and generous friend of the WHO, and we hope it will continue to be so,” WHO director-general Tedros Adhanom Ghebreyesus told a press conference. “We regret the decision of the president of the United States to order a halt in the funding to the WHO.”

Trump made the announcement that the U.S. would cut funding on Tuesday, saying the money would be held back “while a review is conducted to assess the World Health Organization’s role in severely mismanaging and covering up the spread of the coronavirus.”

The United States is the WHO’s largest single donor, contributing between $400 million and $500 million annually to the Geneva-based agency in recent years.

Tedros said the WHO also worked on diseases other than COVID-19, including polio, malaria, cancer, diabetes and mental health.

He also said that countries must work together to stop the virus’ spread.

“When we’re divided, the virus exploits the cracks between us.”

Researchers and health experts around the world panned Trump’s decision to withhold funding on Tuesday.

The European Union on Wednesday said Trump has “no reason” to freeze WHO funding at this critical stage and called for measures to promote unity instead of division.

Trudie Lang, a professor of global health research at Oxford University, said attempts to hinder the WHO’s work could have significant consequences for the pandemic response.

“The reason we’re making such fast progress on diagnostics, vaccines and drugs is because of WHO’s role as a neutral broker,” she said. “It’s their role to bring together the best science.”

On Twitter, Bill Gates — whose foundation was the second-largest donor to the WHO for its latest two-year budget, contributing over $530 million in 2018 and 2019 — wrote that stopping funding for the WHO during a world health crisis “is as dangerous as it sounds.”

“Their work is slowing the spread of COVID-19 and if that work is stopped no other organization can replace them. The world needs WHO now more than ever,” Gates wrote.

Trump has repeatedly labelled COVID-19 the “Chinese virus” and criticized the UN health agency for being too lenient on China, where the novel virus first emerged late last year.

Outside experts have questioned China’s reported numbers of infections and deaths from the virus, calling them way too low and unreliable. And an investigation by the Associated Press has found that six days of delays between when Chinese officials knew about the virus and when they warned the public allowed the pandemic to bloom into an enormous public health disaster.

The WHO has been particularly effusive in its praise for China, calling on other countries to emulate its approach and repeatedly praising China’s transparency.

But China only agreed to a proposed WHO-led mission to investigate the novel coronavirus after Tedros, WHO’s chief, personally paid a visit to Chinese President Xi Jinping, a highly unusual move to secure a country visit during an outbreak.

Tedros said that for now, the WHO would concentrate on fighting COVID-19.

“For now, our focus, my focus, will be on stopping this virus and on saving lives,” he said.

“We’ll work with our partners to feel any financial gaps we face and to ensure our work continues uninterrupted. Our commitment to public health, science and to serving all the people of the world without fear or favour remains absolute.”

— With files from Global News’ Emerald Bensadoun, the Associated Press and Reuters