Home » Health News » You Don’t Want French Fries With That

You Don’t Want French Fries With That

If French fries come from potatoes, and potatoes are a vegetable, and vegetables are good for you, then what’s the harm in eating French fries?

Plenty, say experts and nutritionists, including Eric Rimm, a professor in the departments of epidemiology and nutrition at the Harvard T. H. Chan School of Public Health, who called potatoes “starch bombs.”

Potatoes rank near the bottom of healthful vegetables and lack the compounds and nutrients found in green leafy vegetables, he said. If you take a potato, remove its skin (where at least some nutrients are found), cut it, deep fry the pieces in oil and top it all off with salt, cheese, chili or gravy, that starch bomb can be turned into a weapon of dietary destruction.

A study last year in The American Journal of Clinical Nutrition noted that potatoes have a high glycemic index, which has been linked to an increased risk of obesity, diabetes and cardiovascular disease.

The study found that, controlling for other risk factors, participants who ate fried potatoes two to three times a week were at a higher risk of mortality compared with those who ate unfried potatoes. 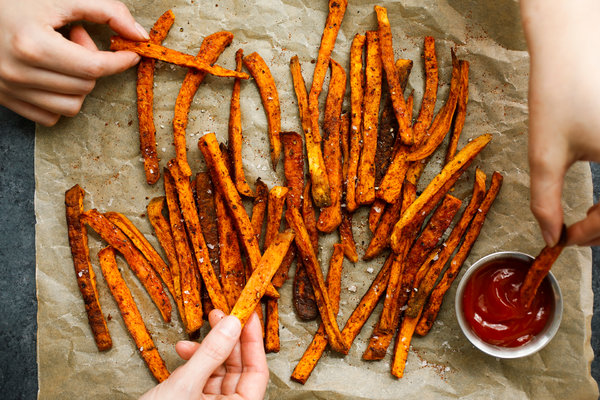 Dr. Nicola Veronese, of Padua, Italy, who was one of the study’s authors, said he and his colleagues were surprised at the amount of French fries Americans consumed compared with the amount consumed by people in other countries.

In the United States, potatoes are the most consumed vegetable, with Americans eating an average of 115.6 pounds of white potatoes a year, of which two-thirds are in the form of French fries, potato chips and other frozen or processed potato products, according to Agriculture Department statistics.

Of Americans’ appetite for fries, Dr. Rimm said, “It’s too bad in this country you’ll pry them from my cold dead hand.”

But fries, with their appealing “mouth feel” of warmed salt and fat, are undeniably tasty. Going fries-free seems like a lot to ask. So if you do indulge, here are some better ways to do it.

How many fries you eat matters more than things like the fries’ surface area or the type of oil used in making them, Lindsay Moyer, a senior nutritionist at the Center for Science in the Public Interest, said.

Consider, for instance, that a large serving of McDonald’s fries is 510 calories, nearly the same as a Big Mac (540 calories), she said. The Agriculture Department lists a serving of fries as three ounces, which amounts to 12 to 15 individual potato sticks, or about 140 calories.

Split your order, get the smallest portion possible or substitute with a side salad or some kind of green vegetable, Ms. Moyer said, or get a baked white or sweet potato instead.

“There aren’t a lot of people who are sending back three-quarters of an order of French fries,” Dr. Rimm said. “I think it would be nice if your meal came with a side salad and six French fries.”

The National Potato Council and the National Restaurant Association did not respond to emails for comment.

Beware of toppings and condiments

Some appetizers consist of fries coated with cheese and chili or other dressings, which can deliver as much as 1,000 calories per serving, Ms. Moyer said.

Don’t overdo it on the condiments, either: An average packet of ketchup is only 10 calories but the same amount of aioli or mayonnaise can add nearly 100 calories.

“With such an epidemic of obesity, nowadays most of us need to cut back,” Ms. Moyer said. “There’s not a lot of room for an extra 100 calories here and there.”

Which kinds and cuts are best?

Elaine Magee, the author of 25 books about nutrition and healthy cooking and a corporate dietitian for the supermarket chain Albertsons Companies, ranked fries best to worst this way:

Homemade baked fries: Make them at a high temperature with a sprinkling of canola or peanut oil.

Home fries: “They tend to still have their skin on as chunked or wedged potatoes, and they aren’t deep fried but tend to be fried in a skillet, usually in oil,” she said.

Sweet potato fries: Ms. Magee said Americans aren’t likely to eat as many of them as white potato fries, and they will have more Vitamin A and fiber. Still, don’t be lulled into thinking too highly of them, Ms. Moyer said, noting they’re “no health food.”

Then, in descending order, according to Ms. Magee: Steak, crinkle cut and shoestring fries, followed by waffle and curly fries, which are a tossup because both have a greater surface area to soak up oil.

Chili cheese fries: These are second to last but it depends on the kinds of fries, the chili ingredients and the amount of cheese, Ms. Magee said.

Diners should ask how often a restaurant changes its oil, Dr. Rimm said. The repeated heating, cooling and reuse of oil promotes the creation of unhealthy fatty acids.

Sharon Zarabi, the bariatric program director and a registered dietitian at Lenox Hill Hospital in Manhattan, noted that corn oil, which is often used in making French fries, is high in omega-6 fatty acids, which contribute to inflammation.

“In a country where we already consume a fatty diet comprising mostly of pro-inflammatory markers of omega-6 versus heart-healthy omega-3 (often found in fatty fish) we must limit its use and intake,” she said in an email.

Check how you feel

Dr. Rimm suggested that consumers track how they feel after eating fries, and that, in turn, might lead to changes in eating habits.

Ms. Magee said to savor the flavor. Take half a fry, put it on your tongue and close your eyes, she said.

“Anything can be eaten healthfully if it’s eaten mindfully,” she said. “If you eat French fries that way, you will probably be satisfied with 10.”