Irritable bowel syndrome (IBS) is the most commonly occurring disorder of the gastrointestinal (GI) tract, affecting mostly the large intestine.

Diagnosis of the condition is challenging as there is no definite test, and doctors have to reply on the symptoms, which are often very similar to other GI disorders. Thus, the identification of appropriate biomarkers is of prime importance for the accurate and timely detection of IBS. 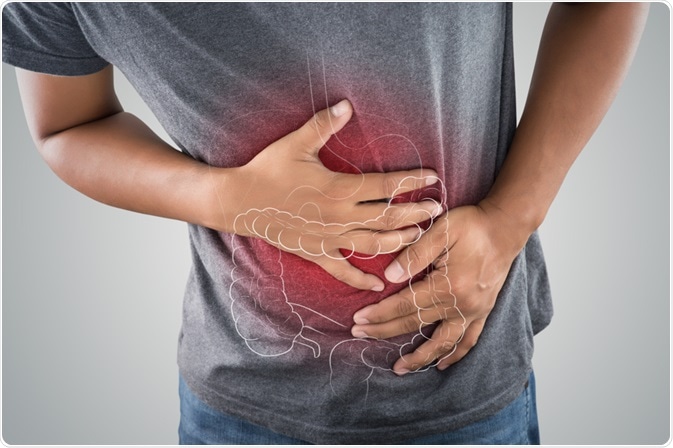 Irritable bowel syndrome is defined as a group of simultaneously occurring GI symptoms, including chronic abdominal pain and alteration in the bowel movement. Other common symptoms include diarrhea, constipation, flatulence, and mucus in the stool.

In most of the cases, the symptoms are mild and can be treated by changing lifestyle and dietary habits and reducing the stress level. IBS does not cause any damage to the GI tract tissue, and thus, does not increase the risk of colorectal cancer.

Although the exact cause of IBS is not known, certain factors can be associated with the condition. For example, the muscles that line the intestinal wall undergo a series of contraction and relaxation to facilitate the movement of foods through the GI tract.

Any alteration in the contractile activity can cause IBS. A stronger than normal and long-lasting contraction can cause flatulence, bloating, and diarrhea, whereas a weaker contraction can lead to slower movement of food and eventual constipation.

Stretching of the abdomen due to excessive gas can cause changes in the GI tract nervous system, which subsequently can alter the signal transmission between the brain and GI tract, leading to increased abdominal pain and discomfort.

Alteration in the gut microbiota in terms of content and diversity can lead to IBS. Moreover, IBS can be developed after an episode of bacteria- or virus-induced diarrhea. Other causes include increased inflammation in the intestine and bacterial overgrowth.

Why is the identification of diagnostic biomarkers important for IBS?

As there is no specific test for IBS, doctors often find it difficult to diagnose the condition. To rule out other GI disorders, doctors review the symptoms, take detailed medical and family history, and perform physical examinations to diagnose IBS.

The best way to overcome diagnosis-related challenges is to identify novel biomarkers that can specifically define IBS. Many studies have been conducted to fulfill this particular need.

To improve treatment efficacy, IBS can be divided into three subgroups: constipation-predominant, diarrhea-predominant, or mixed. Accordingly, specific biomarkers should be identified for each subgroup for an accurate diagnosis.

In constipation-predominant IBS, methane level in breath samples measured by lactulose breath test can be considered as a sensitive (91%) and specific (81.3%) biomarker. It is believed that the amount of methane produced on the breathing test positively correlates with the intensity of constipation in IBS.

Regarding the identification of the causative factor that triggers the onset of IBS, one study has claimed that activation of intestinal nerves due to the secretion of specific molecules in the intestinal wall is one of the major causes of IBS. The study has identified proteases as potential triggers that work via protease-activated receptor type 1.

Using proteome analysis, an IBS-specific protein profile has been established that includes 204 proteins and 4 proteases. Moreover, it has been found that protease inhibitors can inhibit the activation of nerves, indicating that protease profiling can be used as an effective approach to identify biomarkers for IBS.

Of these metabolites, many are associated with collagen degradation and intestinal mucosal turnover processes related to low-grade inflammation. This indicates that disruption of the elastic lining in the intestinal wall may be responsible for an impaired bowel movement in IBS.

In addition to providing pathological features of IBS, these findings reveal that urinary metabolite profiling can be efficiently employed to diagnose IBS patients and monitor the progression of the disease.

Dr. Sanchari Sinha Dutta is a science communicator who believes in spreading the power of science in every corner of the world. She has a Bachelor of Science (B.Sc.) degree and a Master's of Science (M.Sc.) in biology and human physiology. Following her Master's degree, Sanchari went on to study a Ph.D. in human physiology. She has authored more than 10 original research articles, all of which have been published in world renowned international journals.