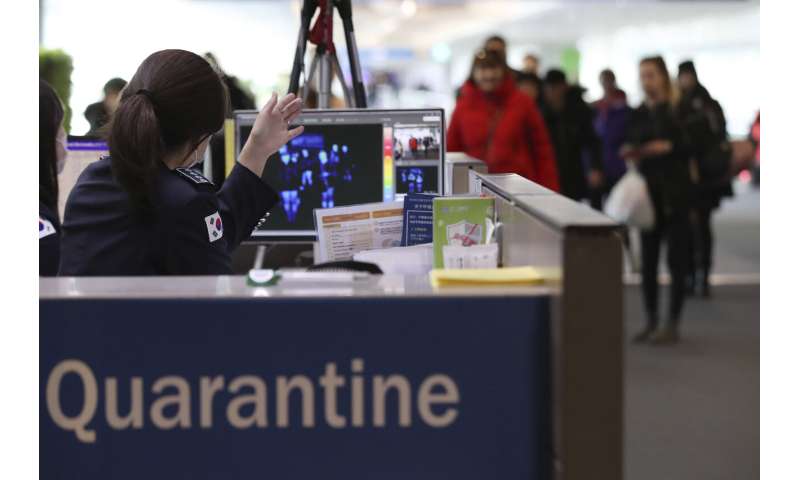 Countries in Asia and elsewhere are checking the body temperatures of arriving airline passengers and adopting precautionary quarantine procedures in response to a new coronavirus that has sickened nearly 300 people and killed six in China. India, Nigeria, Japan and the United States are some of the countries where airport screening procedures were in place.

The outbreak is believed to have originated in the city of Wuhan in central China. The Chinese government’s confirmation that the new virus can spread between humans and has killed six people heightened fears as millions of Chinese planned to travel for the Lunar New Year holiday. So far, South Korea, Japan and Thailand have confirmed cases in Chinese visitors. Widening public health measures are intended to prevent a repeat of the 2002-2003 outbreak of SARS, another coronoavirus that started in China and killed nearly 800 people.

China’s often-secretive Communist government was blamed for making SARS far worse by initially hiding information and blocking the work of the World Health Organization. This time, leader Xi Jinping has called for tough measures and said “party committees, governments and relevant departments at all levels should put people’s lives and health first.” At the airport in Wuhan, the temperatures of departing passengers were checked and outbound tour groups were banned from leaving the city. Virtually everyone in a public role, from traffic police officers to bank tellers, is wearing a protective face mask. n addition to 258 cases in Wuhan, more than 20 have been diagnosed in Beijing, Shanghai, Guangdong province in the south and Zhejiang in the east.

One case of new virus has been detected in Japan. Prime Minister Shinzo Abe urged officials to step up quarantine checks at airports and other entry points. Japan will require visitors arriving from Wuhan to fill in health forms, Chief Cabinet Secretary Yoshihide Suga said. Japan confirmed last week that a man in his 30s tested positive for the coronavirus after returning from the Chinese city. The Japanese Ministry of Health, Labor and Welfare said it tracked down and is monitoring 41 people who had contact with the patient. The ministry says none of them have developed a fever, tight chest or other initial symptoms of the new virus.

The semi-autonomous Chinese city is one of the most popular destinations for mainland Chinese. Along with stepped-up surveillance, additional cleaning and disinfection measures have been ordered for planes and trains from Wuhan as well as for train stations and the airport. Acting Chief Executive Matthew Cheung on Tuesday said authorities are ready for a worst-case scenario and are on extremely high alert. A lack of information and low levels of vigilance were blamed for Hong Kong becoming the second-hardest hit area by SARS after mainland China in the early 2000s. As in much of mainland China, Hong Kong residents favor traditional markets where live poultry and other animals are sold. The government health department has advised people against visiting such markets or touching animals or their droppings. 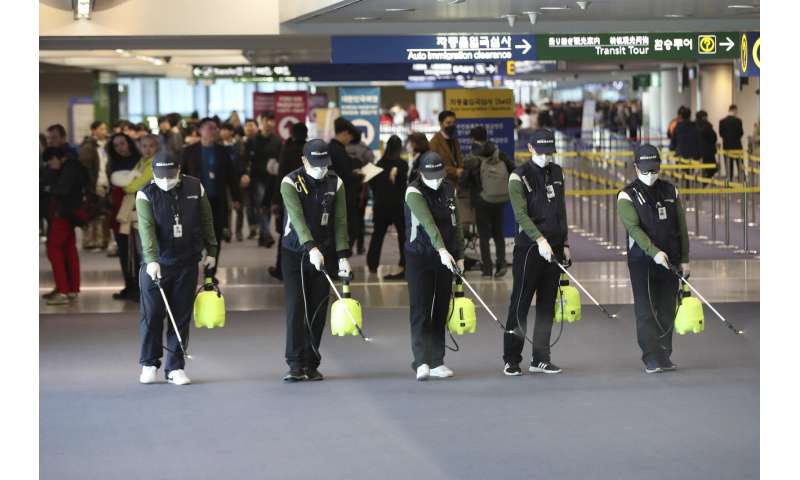 Health screening for the coronovirus has started at three airports in the United States. People on flights from Wuhan, China undergo at screening at New York’s John F. Kennedy International Airport, San Francisco International Airport and Los Angeles International airport. Initial screenings are expected to involve around 5,000 passengers, according to the Centers for Disease Control. The CDC said it has developed a test to detect the new coronavirus and plans to share the tool with domestic and international partners. The U.S. agency described its response to the China outbreak so far as “proactive preparedness precautions.” It said, “Based on current information, however, the immediate health risk … to the general American public is deemed to be low at this time.

South Korea, which reported its first case of the virus on Monday, has enacted strict airport monitoring measures. At Incheon airport near Seoul, the only airport in South Korea with direct flights from Wuhan, authorities have been operating two special gates for passengers from the city since Jan. 3. Officials use ear thermometers to check passengers’ temperatures. Since Jan. 2, airport staff have also been spraying disinfectant at arrival halls twice a week, up from once a week previously. Handrails of moving walkways and escalators, elevator buttons and doors, drinking fountains and other sensitive areas are also wiped with disinfectant twice a day, the airport said. In 2015, South Korea suffered an outbreak of Middle East Respiratory Syndrome which killed 36 people and sickened nearly 200.

Nigeria’s government says health authorities at points of entry are on alert for cases of coronavirus arriving in Africa’s most populous country. The Nigeria Center for Disease Control asked that travelers from Wuhan report to a medical facility and the center if they feel ill. China is Africa’s top trading partner. South Africa’s National Institute for Communicable Diseases said anyone with a severe respiratory illness should be tested if they have traveled to Wuhan within two weeks or had close physical contact with a coronavirus patient or treatment at a facility where a confirmed case has been reported. There were more than 200,000 Chinese workers in Africa as of the end of 2017, not including numerous informal migrants such as traders and shopkeepers, according to the China Africa Research Initiative at Johns Hopkins University.

India announced Tuesday that it will expand thermal screening of passengers arriving from China, including Hong Kong, to seven airports from the current three. In-flight announcements before arrival will direct passengers with a fever or cough who have traveled to Wuhan in the previous 14 days to declare themselves to health authorities. Thermal screening will begin in Chennai, Bengaluru, Hyderabad and Cochin, and continue in Delhi, Mumbai and Kolkata, the Ministry of Civil Aviation said.

Singapore will expand temperature screening at Changi Airport, one of Asia’s busiest travel hubs, for all travelers on flights arriving from China beginning on Wednesday. The health ministry said individuals with pneumonia and a history of travel to Wuhan within 14 days of the onset of symptoms will be isolated in a hospital as a precautionary measure and investigated. Neighboring Malaysia has also beefed up screening at Kuala Lumpur International Airport. Deputy health Minister Lee Boon Chye, inspecting health screening at the airport Tuesday, said staff are being trained to handle possible cases. “If a case emerges, then we may have to take more drastic measures, but for now, we hope we can nip it at the entry point,” Lee told reporters. 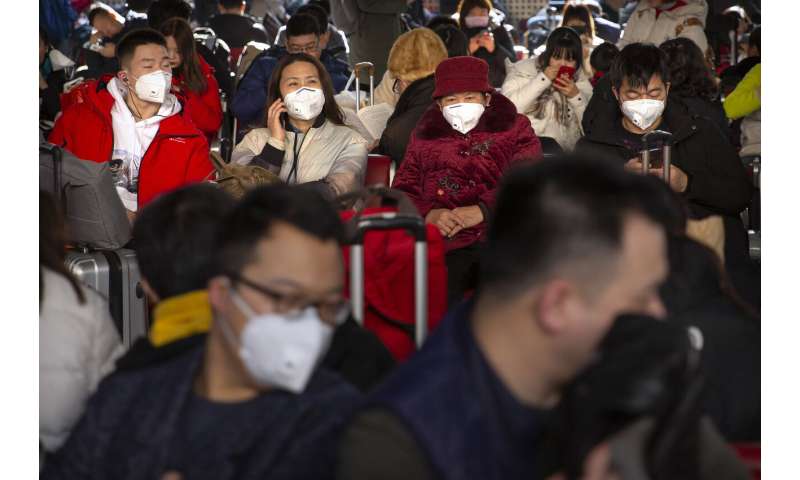 Bangladesh civil aviation authorities have ordered airport managers to start screening incoming passengers from China. A.H.M. Touhid-ul Ahsan, director of the main Shahjalal International Airport, said doctors at the airport would look for fevers, coughs, breathing difficulties and sore throats. The country’s Institute of Epidemiology, Disease Control and Research will be notified of any passengers with symptoms for further examination, he said.

Brendan Murphy, Australia’s chief medical officer, said biosecurity staff and state health officials in New South Wales are meeting flights from Wuhan and are distributing pamphlets printed in English and Chinese to all passengers. The pamphlets describe symptoms of infection and ask people to identify themselves if they are experiencing any. Australian health officials said a man who had traveled to Wuhan was placed in isolation in Brisbane after developing a respiratory illness but had recovered.

Russia’s Healthcare Ministry described the virus as a biological hazard for the country. Speaking at the Russian parliament on Tuesday, Deputy Minister Sergei Krayevoy said the virus was a “striking example” of the biological threats Russia faces.

The Russian public health service, Rospotrebnadzor, said it had developed a testing kit that would allow labs to detect the new coronavirus quickly.

Russia is one of the three most popular tourist destinations for people from China, according to Russian officials. They estimate that about 2 million tourists from China visited Russia in 2018.