Radiation right after surgery might not help prostate cancer patients 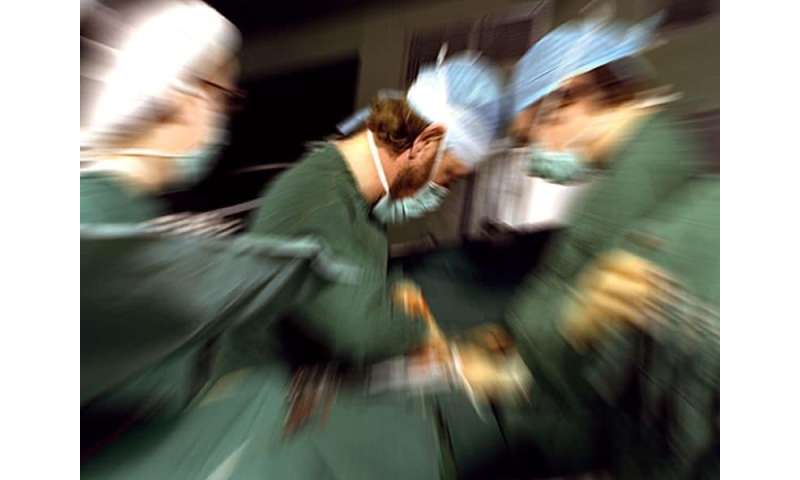 (HealthDay)—In the largest investigation of its kind, researchers conclude that subjecting prostate cancer patients to radiation therapy immediately after surgery doesn’t give them an advantage in staying cancer-free.

The finding stems from a review of four studies that together tracked outcomes for more than 3,500 prostate cancer patients from multiple countries.

If the findings help change standard practice, “the good news is that, in future, many men will avoid the side effects of radiotherapy,” said study first author Chris Parker, of the Institute of Cancer Research in London.

His team was to present its findings Friday at the European Society for Medical Oncology annual meeting, in Barcelona.

Parker stressed that radiation side effects can be troublesome. They “include urinary leakage and narrowing of the urethra, which can make urination difficult,” he said in a meeting news release. “Both are potential complications after surgery alone, but the risk is increased if radiotherapy is used as well.”

“Many men that undergo radical surgery for prostate cancer may have a spread of the disease beyond the capsule of the prostate, or invasion [of the tumor] into the seminal vesicles or lymph nodes,” said Dr. Louis Potters, deputy physician-in-chief at Northwell Health Cancer Institute, in Lake Success, N.Y.

“These factors occur in about 30% of men having surgery,” said Potters, who wasn’t involved in the new trial. The post-op radiation is meant to “mop up” potential cancer cells that may have spread beyond the prostate.

“Several randomized controlled studies with long-term follow-up conclude that earlier use of radiotherapy is better than delayed radiotherapy to control the disease,” Potters noted.

But according to Parker’s group, the new trial is one of the largest such investigations into the issue, involving nearly 1,400 men who’d undergone prostatectomy. After their operation, the men were randomly assigned to one of two groups. One group got radiation right away, while the other was treated with a “watch-and-wait” approach and only got radiation if the cancer returned.

Outcomes for both groups were monitored closely for five years.

Parker’s team found that when it came to the risk of cancer’s return, there was essentially no difference between the two groups. The trial found that 85% of men in the immediate-radiation group were free of cancer five years after their surgery, compared with 88% among the men whose radiation was either delayed or never ordered.

There was a big difference in terms of unwanted side effects, however: while 5.3% of men who got post-surgical radiation said they suffered from urinary incontinence during the year after the treatment, that number fell to 2.7% among men in the “watch-and-wait” protocol.

A second analysis pooled the results of three other studies, which in total involved about 2,150 men. That study also found just a 1% difference in five-year survival rates between the radiation and no-radiation groups.

Taken together, the results suggest that prostate cancer patients can safely forgo immediate post-surgical radiation—as well as the side effects radiotherapy can bring, Parker said.

“The results suggest that radiotherapy is equally effective whether it is given to all men shortly after surgery or given later to those men with recurrent disease,” said Parker, who is also with The Royal Marsden NHS Foundation Trust. “There is a strong case now that observation should be the standard approach after surgery, and radiotherapy should only be used if the cancer comes back.”

The case may not be completely closed on this issue, however. The London team suggested that continued research is needed to track disease-progression rates for a full 10 years.

For his part, Potters agreed that the five-year follow-up is still too short a time to justify a definitive change in practice. But he said that, already, U.S. physicians are often backing away from giving all patients radiation immediately after prostatectomy. Instead, they are making decisions based on tumor type and other factors.

And Potters said that ongoing advances in genetic testing “may ultimately best determine who most needs early post-operative radiotherapy.”

Dr. Lee Richstone is chairman of urology at Lenox Hill Hospital in New York City. Reviewing the new data, he agreed that the practice of giving patients immediate post-op radiation has been “controversial,” and the U.K. study might lay the controversy to rest.

“The results suggest there is no benefit to immediate radiation, and patients can be safely watched,” Richstone said. “This is important because it helps to prevent thousands of patients from getting radiation that they may not need, and radiation can have toxic side effects in some men,” he added.

“More research is needed,” Richstone said, “but this data supports what I do for the patients I operate on. Most are observed without radiation, unless they have multiple high-risk features and the benefits of radiation outweigh the risks.”