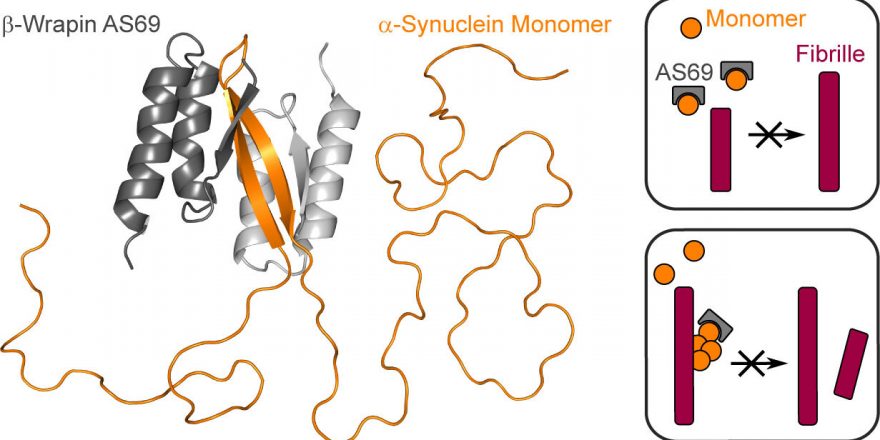 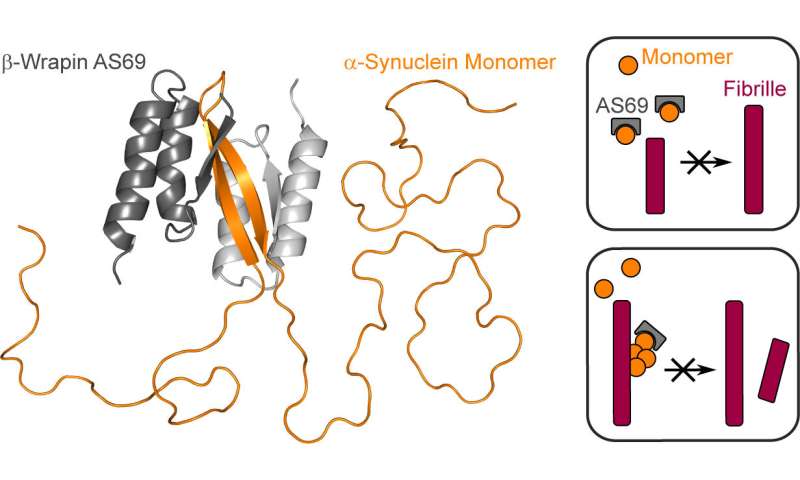 Protein aggregates have been observed in the nerve tissue of patients with Parkinson’s disease which consist of individual components (monomers) of the protein α-synuclein which assemble into what are referred to as amyloid fibrils. Similar deposits are also found in the case of other neurodegenerative diseases such as Alzheimer’s. Researchers are looking for approaches to prevent fibril formation and potentially cure the diseases.

In 2014, Düsseldorf-based researchers led by Prof. Dr. Wolfgang Hoyer described how a class of engineered binding-proteins, β-wrapins, are able to prevent α-synuclein aggregation. Hoyer says: “We subsequently investigated with research partners precisely how the β-wrapins function and where they disrupt the α-synuclein aggregation process.”

Firstly, the researchers found out that the β-wrapins prevent new α-synuclein monomers from elongating the amyloid fibrils. To do this, the β-wrapins capture the monomers and form chemical complexes with them.

But there is a further property that makes the β-wrapins particularly effective, as explained by Emil Agerschou: “The β-wrapins prevent seed fibrils from forming in the first place. It is especially relevant that very small amounts of the wrapins are sufficient for this to happen, so you don’t need a binding-protein for every monomer.” This is referred to as a ‘sub-stoichiometric effect’ that makes the process especially effective. It is the aforementioned complexes comprising binding-proteins and monomers that are responsible for inhibiting seed formation.

“We discovered a few years ago that α-synuclein fibrils can proliferate quickly under certain conditions in a kind of chain reaction. We were really astonished to see that the β-wrapins suppress the chain reactions very efficiently,” adds Prof. Büll: “We think we now understand how this is achieved.”

In addition, the researchers have examined the effect of the β-wrapins not only in test tubes but also in cell culture and in animal models. Diseased fruit flies (Drosophila) treated with β-wrapins displayed notably improved motor skills in a climbing assay.