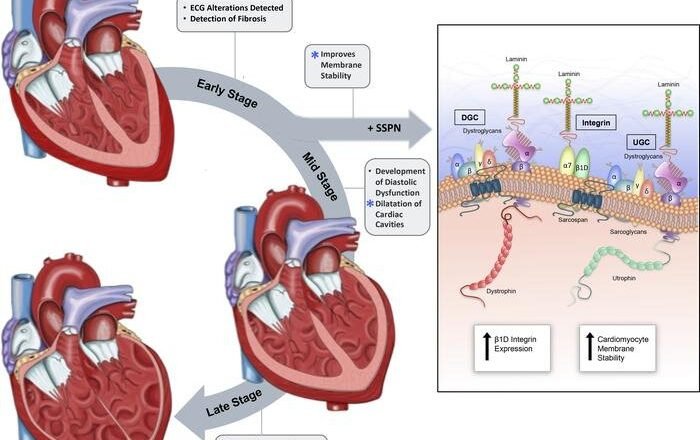 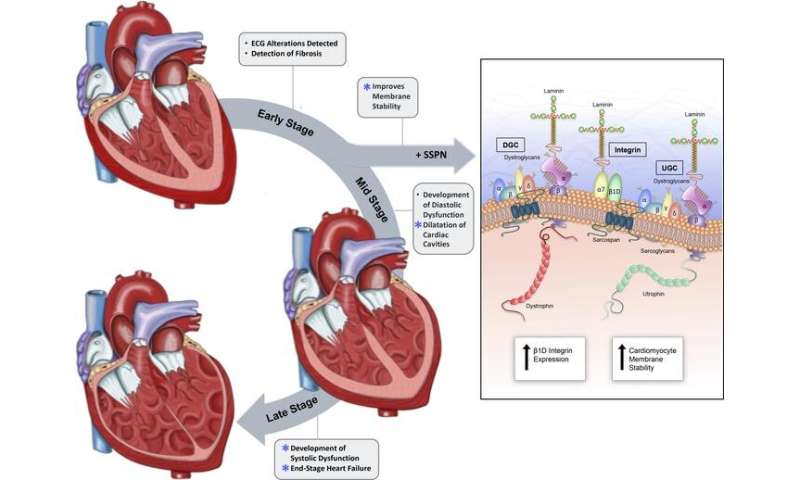 A new multi-institution study spearheaded by researchers at Florida State University and the University of California, Los Angeles suggests a tiny protein could play a major role in combating heart failure related to Duchenne muscular dystrophy (DMD), the most common lethal genetic disorder among children.

In collaboration with scientists from across the nation, FSU researchers found that increased levels of the protein sarcospan improve cardiac function by reinforcing cardiac cell membranes, which become feeble in patients with DMD.

Their findings were published in the journal JCI Insight.

The condition, which typically afflicts young boys, is caused by a mutation that prevents the body from producing dystrophin, a protein crucial to the health of skeletal, respiratory and cardiac muscles. Advances in treatment for certain types of DMD-related muscle degradation have helped to prolong patients’ lifespans. However, as DMD patients age, their heart function declines dramatically.

“Patients typically live to 20 or 30 years of age,” said lead author Michelle Parvatiyar, an assistant professor in the Department of Nutrition, Food and Exercise Sciences in FSU’s College of Human Sciences. “There have been important improvements in respiratory care, which used to be what a majority of patients would succumb to. Now, in their 20s and 30s, they’re often succumbing to cardiomyopathy. The heart is functioning with a major component of the cell membrane missing. Over time, it wears out.”

The study was part of continued efforts by UCLA biologist Rachelle H. Crosbie, the study’s corresponding author, who previously identified sarcospan as a protein that could improve mechanical support in skeletal cell membranes lacking dystrophin. Her finding buoyed DMD researchers and affirmed sarcospan’s potential as an effective tool in the fight against the condition.

“But nobody had really looked at how increasing the levels of this protein might affect the heart,” Parvatiyar said.

Using a unique mouse model with a dearth of dystrophin, Parvatiyar and her collaborators did just that.

In their study, the team found that while it’s is not a like-for-like replacement for dystrophin, an overexpression of sarcospan in cardiac cells seems to do the job of stabilizing cell membranes. Even under stress, researchers found, sarcospan overexpression was able to improve the membrane defect in dystrophin-deficient cells.

“Sarcospan doesn’t quite do the job of dystrophin, but it acts as a glue to stabilize the membrane and hold protein complexes together when dystrophin is lacking,” said Parvatiyar, explaining a concept developed by Crosbie.

Cardiac measurements confirmed that sarcospan does protect the cell membrane even when the heart is placed under stress. Study co-author and FSU College of Medicine Associate Professor Jose Pinto performed the measurements, along with FSU graduate student Karissa Dieseldorff Jones and University of Miami Miller School of Medicine research assistant Rosemeire Takeuchi Kanashiro.

In addition to serving as a kind of stabilizing glue, researchers said sarcospan could also act as a scaffold that supports other essential proteins at the cell membrane. That function could allow sarcospan to carry mini versions of dystrophin—which, in its normal state, has a long and unwieldy genetic code—to the edges of cardiac cells, where they could buttress the fragile membranes.

“The idea is that you could administer the sarcospan and the dystrophin at the same time, and the sarcospan could facilitate mini dystrophin localizing to the cell membrane and help hold those complexes in place,” Parvatiyar said.

Sarcospan’s two possible functions could augment existing DMD treatments, Parvatiyar said, or they could give rise to novel therapies that fortify weakened cardiac cell membranes and improve the quality of life for people with DMD.

In her previous position at UCLA, Parvatiyar had frequent interactions with DMD patients and their families. She said these interactions, and the unshakeable hope she’s witnessed in those suffering from DMD, continue to drive her and her colleagues in the search for new ways to combat this debilitating condition.