Promising new research by Christian Mueller, Ph.D., and Robert H. Brown Jr., DPhil, MD, at the University of Massachusetts Medical School, provides evidence that a therapy using synthetic microRNAs may safely treat patients with amyotrophic lateral sclerosis (ALS), also known as Lou Gehrig’s disease. The study, appearing in Science Translational Medicine, shows that a gene therapy delivered to motor neurons via a viral vector was able to silence SOD1 protein, mutations of which are linked to ALS, without causing any adverse effects.

“The beauty of this study is that we were able to achieve silencing of the SOD1 protein by more than 90 percent in some motor neurons,” said Dr. Mueller, an associate professor of pediatrics at UMass Medical School and a member of the Horae Gene Therapy Center at UMMS. “This level of silencing, coupled with the lack of adverse effects, suggests that this approach to treating ALS should be safe in humans and also that therapy can potentially be done with a one-time treatment.”

ALS is a progressive, neurodegenerative disorder affecting the motor neurons in the central nervous system. It is estimated that 6,000 people in the U.S. are newly diagnosed with the disease each year. As motor neurons die, the brain’s ability to send signals to the body’s muscles is compromised, leading to the loss of voluntary and involuntary muscle movement, paralysis and eventually death from respiratory failure. The average survival rate for patients with ALS is three to five years. In 1993, a team of researchers led by Robert H. Brown Jr., MD, DPhil, chair of neurology at the University of Massachusetts Medical School, discovered the first gene linked to familial ALS, a protein anti-oxidant known as superoxide dismutase, or SOD1. Only 10 percent of ALS cases are familial, while roughly 90 percent are sporadic in nature—meaning there is no identifiable familial risk or family history.

Gain-of-function mutations to the SOD1 gene, such as those targeted in the experiment described in this publication, account for 20 percent of all inherited cases of ALS, while misfolding of the SOD1 protein has also been identified in other so-called “sporadic” cases of ALS, making it a likely target for therapy. A potential therapy for these cases is to suppress the expression of mutant genes or reduce the amount of misfolded protein. The belief is that by doing so, the neurotoxicity that causes motor neuron death may be avoided or possibly reversed. One approach to targeting these genes uses microRNAs. MicroRNAs are part of the natural RNA silencing machinery found in plants and animals. These small non-coding RNAs pair to complementary sequences found on messenger RNA and destabilize them so the cell can’t turn these molecules into proteins. Using this cell machinery, scientists believe they can effectively “turn off” toxic genes and proteins that cause disease. 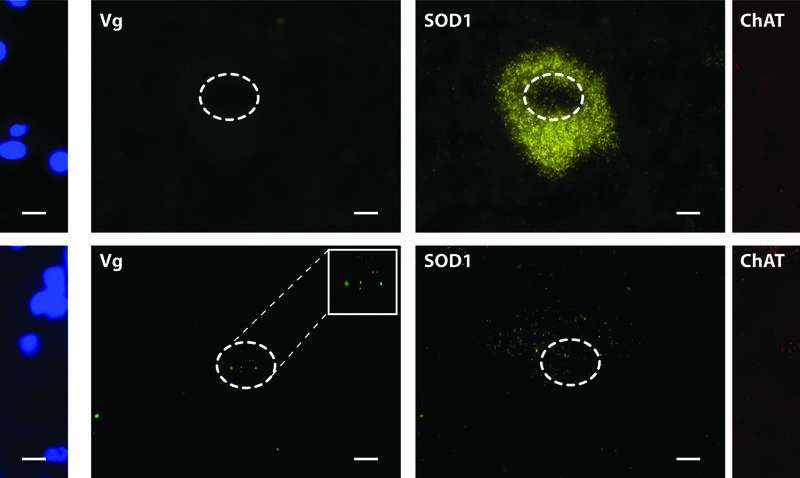 It has already been conclusively shown in mice models that silencing SOD1 can increase survival time, as well as reduce muscle loss and respiratory impairments. In this study, Mueller and colleagues evaluated the ability of an adeno-associated virus from a rhesus monkey to deliver artificial microRNAs to silence the SOD1 gene in macaques.

More than 180 different mutations to the SOD1 gene has been linked to ALS. To account for all these disease-causing variations, scientists in the Mueller lab identified commonalities in the DNA sequences of these various mutations. This allowed them to take an approach to the composition of their drug using RNA sequences capable of targeting as many of the different SOD1 mutations as possible. “Otherwise, each unique mutation sequence would require its own drug to silence,” said Mueller. “This approach allows us to target the vast majority of the patients with an SOD1 mutation using a single drug.”

Delivering the drug through the spinal fluid showed that the adeno-associated virus was able to express its cargo throughout the length of the motor neurons, which can be up to three feet long, from the muscle, up the spinal column to the brain. Once delivered, these viruses deployed their RNAi therapeutic and reduced SOD1 protein production in the motor neurons by as much as 93 percent. Mueller and colleagues also showed that the miRNA drug didn’t cause liver toxicity and the viral delivery vector elicited no immune reaction. Similarly, off-target silencing of genes with similar sequences, often a concern with many gene therapy techniques, was not detected.