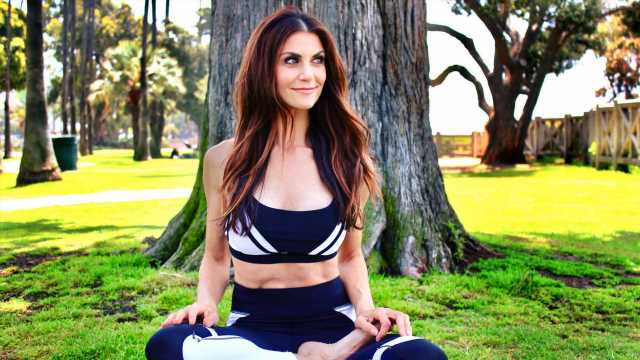 Regular exercise and a healthy diet have always been a priority in my life, and for years I thought I was nailing it.

I stuck to a low-fat diet, I did lots of cardio, I even got certified as a trainer (in between co-hosting Dancing With The Stars and taping Entertainment Tonight). I was doing everything the “experts” told me I was supposed to do and felt strong and healthy. I even looked like the picture of health.

In late 2013, I was getting ready to shower after a workout. In the process of wrestling my way out of my sweaty sports bra, my hand grazed over something I’d never felt before: a lump, about the size of a quarter, barely sticking out of the inside front of my right breast.

My first instinct, surprisingly, was not to worry about it—I had just had my first mammogram 11 days earlier.

My doctors told me everything came back clear. They mentioned that I had dense breasts—which mainly just means I had more connective tissue compared to fat in my breasts, according to Susan G. Komen—but dense breasts are extremely common, and surely my doctors would have mentioned this lump if they had seen it. (I later found out the density hid the lump from view on the mammogram).

Despite having dense breasts, which can heighten your risk of developing breast cancer, I also didn’t have any of the usual risk factors of breast cancer, like a family history of the disease or other lifestyle factors like alcohol use. In my mind, I should’ve been in the clear.

Still, I couldn’t stop thinking about the lump, and so the next day I called my ob-gyn. After checking it out, she reassured me it was nothing. Breasts can be lumpy, it’s fine. Yet when the lump was still there a month later, I made an appointment with my internist, just to be safe. He also told me it was nothing.

But my gut feeling wouldn’t go away; I knew something was wrong. So, four months later, I decided to see a surgical oncologist, just to settle it once and for all. doing two ultrasounds, an MRI, and a needle biopsy she told me, just as the previous doctors had, that it wasn’t cancer. But she added that she was unclear what the collection of odd cells were, so she recommended a lumpectomy to remove it and test it—just so I wouldn’t have to worry about it.

A week after the lumpectomy, I returned to the surgeon, alone, for the pathology results—and left in utter shock.

Five years ago today, I lay in a hospital bed awaiting my bilateral mastectomy. Today, I am stronger than ever! Five years ago, I had invasive breast cancer. Just 40 years old. My hubby and I have little girls who were just ages 3 and 6 at the time. Life stopped. Forget the daily hustle. It became all about survival. I didn't know what the next days, weeks and months would entail. I just knew I needed to get through it. Survive then focus on trying to thrive. My diagnosis blindsided me, my husband and our family. My dad died of colon cancer…so my diagnosis news hit my mom and sister hard, too. My hubby, although strong for me and our girls, felt scared and worried about how he would get along without me and raise two girls without their mom/his wife, if this didn't all go the way we prayed. Some moments, it was all too much to bear. Some days were dark, but I tried so hard to find the light. That focus shift to look to the positive side and search for the silver lining in even the little things truly helped me through. My mom, sister, mother-in-law and cousin-in-law all took turns flying in to assist my ever-present and rockstar helper/healer hubby. I have so much gratitude for them…and for my friends and family who texted, called, sent goodies and gave support daily. It takes a village of a positive support squad to get through the sh*t storm of cancer. Thank goodness I had and still have them all. To those strangers who reached out to share their stories of survival, I will be forever thankful. To those of you who are going through it all now…I want to share the light. You WILL get to the "other side". Sending love, support and empowerment to you all. ❤️❤️???

In hindsight, it probably wasn’t the best idea to get my results alone, but again, every expert up until then said I didn’t have cancer.

The results showed otherwise: I actually did have breast cancer, a type called ductal carcinoma in situ (DCIS). The pathology showed it was invasive, and my doctor said I would need further surgery to remove all the invasive bits they could find. I hurried back to my husband after the appointment and collapsed to the ground when I saw him. I cried uncontrollably as he wrapped his arms around me.

The news sent me into an anxiety tailspin—I was afraid in a way I’d never been afraid before. I was a wife to a man I adored, I was a mother of two young daughters that I very much wanted to see grow up, I had a career I loved—was I going to lose all of that? Then, in a moment of clarity (and many deep breaths), I realized that what was really scaring me was far beyond the possibility of bad things happening but the fact that I couldn’t control what happened. I decided then and there to focus only what I could control — my attitude and my actions — and leave the rest to my medical team.

In May of 2014, I had a double mastectomy, which was later followed by breast reconstruction surgery. During the double mastectomy, doctors found the cancer had already spread to one lymph node, which they also removed. It was devastating news, but I chose to focus on how lucky I was: My cancer had been caught early, it was slow growing, there was no cancer in my other breast, and I was otherwise healthy and fit, which would reduce chances of complications during surgery and lead to a quicker recovery.

For the first time in a long time, I felt like I was going to be ok—but I had a long road of lifestyle changes in front of me.

Looking at the weekend like…. I know, I know. It’s only #humpday but I just so love getting to be outside. Our LA weather is warming up and I love soaking it up (with a zinc-based sunscreen, of course)! What are you guys planning to do this weekend? Comment below

Cancer forced me to shift into a more positive mindset—and that led to me reevaluating my “healthy” lifestyle.

I started with my diet. I always thought my low-fat diet was healthy, despite being loaded with pre-packaged foods. (Eating a sleeve of sugar-laden—but fat-free!—cookies isn’t necessarily good for you). Instead, I switched to a plant-based, whole foods diet rich in healthy fats, like avocados, nuts and seeds. I also limited the amount of meat I was consuming, and swapped conventional produce for organic versions—especially when it came to the greens I was eating more of.

I tackled my workout regimen next. I have always loved exercising and I needed to do five to six workouts a week to stay sane and fit. But I learned to mix up my routines, adding in more restorative workouts like yoga, to help my body grow and recover in other ways. I had to realize fitness wasn’t about just burning calories so you can eat more cake, it’s about improving your overall health and wellness—both mental and physical. Instead of focusing on staying thin to look good in a dress, my goals became about being able to feel healthy, energetic and fit now as well as staying able-bodied and strong.

My body and mind loved these changes and I soon began to actually see an unexpected yet delightful change. I’ve always been a healthy weight but now I was leaning out and seeing muscles where I never had before. My skin was glowing, my hair was shiny, and my energy levels were through the roof! No more afternoon slumps or falling asleep while putting my daughters to bed.

But I didn’t just focus on physical changes. I also took a hard look at my personal connections and how they were helping or hurting me. I made difficult choices to cut toxic people and relationships out of my life, and I vowed to only accept work projects I truly loved. I learned ways to minimize stress. But most importantly, I made it my top priority to spend time with those people who fed my soul and built me up, especially my family.

It’s officially been six years since I was diagnosed with breast cancer—and I’ve remained cancer-free.

While all of my tests continue to show no evidence of cancer in my body – although I know there is always a risk of recurrence, even if you do everything right – I prefer to say that I’m finally free—not just cancer-free. I’m also free of so many of the other unhealthy habits, situations, and people that were detracting from my life before my diagnosis.

I thought I was healthy before cancer, but I had no idea what it felt like to be truly healthy. Now I’m happier, healthier, and in better shape than I’ve ever been in my life—and that’s true freedom.

For more information on Samantha Harris, follow her on Instagram @samanthaharristv, check out her book “Your Healthiest Healthy”, and catch her on TV. She is also an ambassador for the Susan G. Komen breast cancer foundation.